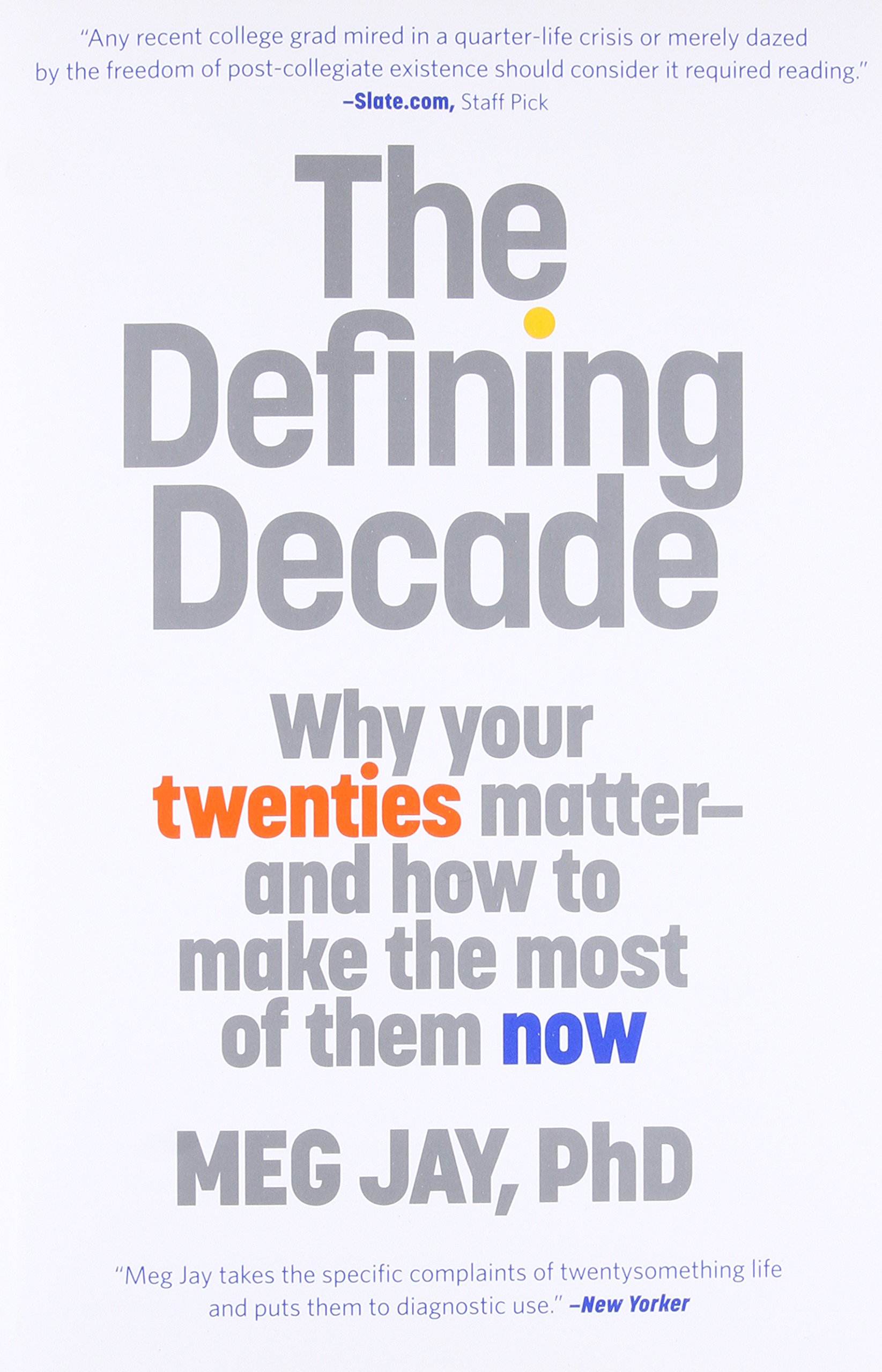 Dr. Meg Jay reveals how many twentysomethings have been caught in a swirl of hype and misinformation that has trivialized what are actually the most defining years of adulthood.

This was a smack in the face at every turn. The key lesson is that committing to jobs, career paths, relationships earlier in life tends to be a beneficial choice. Don't just say "I'll start my adult life in my 30s." Get serious about relationship and career decisions early! Pursuing maximum short term optionality leads to LESS long term optionality. The grass is greenest where you water it.

Two-thirds of lifetime wage growth happens in the first ten years of a career.

More than half of us are married, or dating, or living with our future partner, by age thirty.

What is worse are the tears shed by thirtysomethings and fortysomethings because they are now paying a steep price—professionally, romantically, economically, reproductively—for a lack of vision in their twenties.

It seemed unfair to talk about her weekends when it was her weekdays that made her so unhappy.

Freud once said, “Love and work, work and love… that’s all there is,” and these things take shape later than they used to.

There are fifty million twentysomethings in the United States, most of whom are living with a staggering, unprecedented amount of uncertainty.

Uncertainty makes people anxious, and distraction is the twenty-first-century opiate of the masses.

The postmillennial midlife crisis is figuring out that while we were busy making sure we didn’t miss out on anything, we were setting ourselves up to miss out on some of the most important things of all.

The twenties are that critical period of adulthood. These are the years when it will be easiest to start the lives we want. And no matter what we do, the twenties are an inflection point—the great reorganization—a time when the experiences we have disproportionately influence the adult lives we will lead.

an extended period of navel-gazing is usually counterproductive for twentysomethings.

Identity capital is our collection of personal assets. It is the repertoire of individual resources that we assemble over time. These are the investments we make in ourselves, the things we do well enough, or long enough, that they become a part of who we are.

More often, identities and careers are made not out of college majors and GPAs but out of a couple of door-opening pieces of identity capital—and I was concerned that Helen wasn’t earning any.

A degree from a university followed by too many unexplained retail and coffee-shop gigs looks backward. Those sorts of jobs can hurt our résumés and even our lives.

I felt a lot of internal pressure to figure it out, but all the thinking I did was really debilitating and unproductive.

‍The one thing I have learned is that you can’t think your way through life. The only way to figure out what to do is to do—something.

Even if it’s a bit edgy, a bit out of your comfort zone, saying yes means you will do something new, meet someone new, and make a difference.

The urban tribe is overrated. For the past decade or so, there has been much talk about the urban tribe, or the makeshift family that has come to the fore as twentysomethings spend more years on their own.

From the schoolyard to the boardroom, people are more likely to form close relationships with those most like themselves. As a result, a cluster of strong ties—such as the urban tribe or even an online social network—is typically an incestuous group. A homogeneous clique

Weak ties are like bridges you cannot see all the way across, so there is no telling where they might lead.

When weak ties help, the communities around us—even the adult community that twentysomethings are warily in the process of entering—seem less impersonal and impenetrable. Suddenly, the world seems smaller and easier to navigate. The more we know about the way things work, the more we feel a part of things.

“He that hath once done you a kindness will be more ready to do you another than he whom you yourself have obliged.”

If weak ties do favors for us, they start to like us. Then they become even more likely to grant us additional favors in the future. Franklin decided that if he wanted to get someone on his side, he ought to ask for a favor. And he did.

The Ben Franklin effect shows that, while attitudes influence behavior, behavior can also shape attitudes. If we do a favor for someone, we come to believe we like that person.

A WISE MAN MAKES HIS OWN LUCK. Perhaps the single best thing we can do to make our own luck in our twenties is say yes to our weak ties or give them a reason to say yes to us.

Being confused about choices is nothing more than hoping that maybe there is a way to get through life without taking charge.

Goals direct us from the inside, but shoulds are paralyzing judgments from the outside. Goals feel like authentic dreams while shoulds feel like oppressive obligations.

‍you can’t pull some great career out of a hat in your thirties. You’ve got to start in your twenties

One thing this has taught me is that a good story goes further in the twentysomething years than perhaps at any other time in life.

As a twentysomething, life is still more about potential than proof.

Those who can tell a good story about who they are and what they want leap over those who can’t.

This is how it’s done. This is how it starts. Claiming a career or getting a good job isn’t the end; it’s the beginning.

“the slower you go, the faster you get there.”

‍Sometimes the best way to help people is to slow them down long enough to examine their own thinking.

Studies have repeatedly found that couples who are similar in areas such as socioeconomic status, education, age, ethnicity, religion, attractiveness, attitudes, values, and intelligence are more likely to be satisfied with their relationships and are less likely to seek divorce.

Eli and his girlfriend needed to be “in like.” By this I mean two things: being alike in ways that matter and genuinely liking who the other person is. Often these go hand in hand. That is because the more similar two people are, the more they are able to understand each other.

Studies have repeatedly found that couples who are similar in areas such as socioeconomic status, education, age, ethnicity, religion, attractiveness, attitudes, values, and intelligence are more likely to be satisfied with their relationships and are less likely to seek divorce

Sometimes the only thing wrong with another person is that he or she is a poor match for your own personality.

Neuroticism, or the tendency to be anxious, stressed, critical, and moody, is far more predictive of relationship unhappiness and dissolution than is personality dissimilarity.

Life can only be understood backward, but it must be lived forward. —Søren Kierkegaard, philosopher

The more you use your brain, the more brain you will have to use. —George A. Dorsey, anthropologist

Never again will it be so easy to become the people we hope to be. The risk is that we may not act now.

The twenties are, indeed, the time to get busy. It’s forward thinking for an uncertain age.

Twentysomethings who don’t feel anxious and incompetent at work are usually overconfident or underemployed.

William James, the father of research psychology in the United States, said “The art of being wise is knowing what to overlook.”

Frankl describes our attitudes and reactions as being the last of our human freedoms.

Inaction breeds fear and doubt. Action breeds confidence and courage. If you want to conquer fear, do not sit home and think about it. Go out and get busy. —Dale Carnegie, writer and lecturer

Real confidence comes from mastery experiences, which are actual, lived moments of success, especially when things seem difficult. Whether we are talking about love or work, the confidence that overrides insecurity comes from experience. There is no other way.

No matter what word you use, confidence is trusting yourself to get the job done—whether that job is public speaking, sales, teaching, or being an assistant—and that trust only comes from having gotten the job done many times before.

Love and work are the cornerstones of our humanness. —Sigmund Freud, neurologist and founder of psychoanalysis

Feeling better doesn’t come from avoiding adulthood, it comes from investing in adulthood.

Being chronically uncoupled may be especially detrimental to men, as those who remained single throughout their twenties experienced a significant dip in their self-esteem near thirty.

The availability heuristic is a mental shortcut whereby we decide how likely something is based on how easy it is to bring an example to mind.

So many years doing things and hanging out with people that don’t even rate a memory. For what? I had a good time in my twenties, but did I need to do all that for eight years? Lying there in the MRI, it was like I traded five years of partying or hanging out in coffee shops for five more years I could have had with my son if I’d grown up sooner. Why didn’t someone drop the manners and tell me I was wasting my life?

As I gathered up my maps and turned to go, I hesitated and asked the ranger, “Am I going to make it?” He looked at me and said, “You haven’t decided yet.”

The future isn’t written in the stars. There are no guarantees. So claim your adulthood. Be intentional. Get to work. Pick your family. Do the math. Make your own certainty. Don’t be defined by what you didn’t know or didn’t do. You are deciding your life right now.