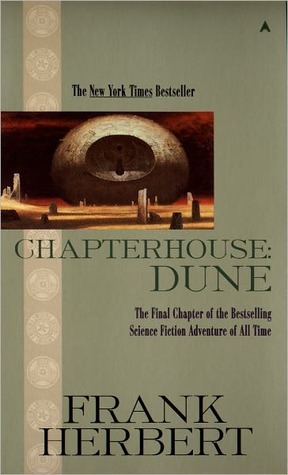 The desert planet Arrakis, called Dune, has been destroyed. Now, the Bene Gesserit, heirs to Dune's power, have colonized a green world--and are turning it into a desert, mile by scorched mile.

As always, Herbert fills this book with great aphorisms and wisdom to complement the plot. Great 6 books. Fantastic legacy for Frank Herbert. Good close to the saga.

“Enclosures of any kind are a fertile breeding ground for hatred of outsiders,” she said. “That produces a bitter harvest.”

The old religion is sure to persist even though somewhat altered. It is probable that a rabbi from ancient times would not find himself out of place behind the Sabbath menorah of a Jewish household in your age.

If you fitted yourself too tightly to one thing, other abilities atrophied. We become what we do.

Confine yourself to observing and you always miss the point of your own life. The object can be stated this way: Live the best life you can. Life is a game whose rules you learn if you leap into it and play it to the hilt. Otherwise, you are caught off balance, continually surprised by the shifting play. Non-players often whine and complain that luck always passes them by. They refuse to see that they can create some of their own luck. —DARWI ODRADE

Power attracts pathological personalities. It is not that power corrupts but that it is magnetic to the corruptible. Such people have a tendency to become drunk on violence, a condition to which they are quickly addicted. —MISSIONARIA PROTECTIVA, TEXT QIV (DECTO)

“You accumulate a lot of small observations, sensed but never brought to consciousness,” Shoel had said. “Cumulatively, they say things to you but not in a language anyone speaks. Language isn’t necessary.”

“Language obstructs you,” Shoel had said. “What you do is learn to read your own reactions. Sometimes, you can find words to describe this . . . sometimes . . . not.”

“Then what do you depend on?” “My own internal reactions. I read myself, not the person in front of me. I always know a lie because I want to turn my back on the liar.”

Remember, it is the victors who breed. You understand?”

His teachers had warned against absolutes. They created a serious flaw in a Mentat. “Everything you do, everything you sense and say is experiment. No deduction final. Nothing stops until dead and perhaps not even then, because each life creates endless ripples. Induction bounces within and you sensitize yourself to it. Deduction conveys illusions of absolutes. Kick the truth and shatter it!”

Education is no substitute for intelligence. That elusive quality is defined only in part by puzzle-solving ability. It is in the creation of new puzzles reflecting what your senses report that you round out the definition. —MENTAT TEXT ONE (DECTO)

Many things we do naturally become difficult only when we try to make them intellectual subjects. It is possible to know so much about a subject that you become totally ignorant.

Laws to suppress tend to strengthen what they would prohibit. This is the fine point on which all the legal professions of history have based their job security.

“We should grant power over our affairs only to those who are reluctant to hold it and then only under conditions that increase the reluctance.”

Politics: the art of appearing candid and completely open while concealing as much as possible.”

“There appears to be a rule of nature that says it’s almost impossible for self-serving groups to act enlightened.”

Face your fears or they will climb over your back.

Clean and neat. Plan ahead. Maintain your habitat. This moment is part of forever.

Time does not count itself. You have only to look at a circle and this is apparent. —LETO II (THE TYRANT)

From the moment the oracle speaks your future becomes identical to your past. How you would wail in your boredom. Nothing new, not ever. Everything old in that one instant of revelation.

Purposeful instruction of the masses. This is firmly seated in our belief that the aim of argument should be to change the nature of truth. In such matters, we prefer the use of power rather than force. —THE CODA

Thinking you knew something was a sure way to blind yourself.

It was not growing up that slowly applied brakes to learning (Mentats were taught) but an accumulation of “things I know.”

“Moral decisions are always easy to recognize,” Odrade said. “They are where you abandon self-interest.”

(A hunchback does not see his own hunch.—Folk

“The victors bred. We are their descendants. Victory often was gained at great moral price. Barbarism is not even an adequate word for some of the things our ancestors did.”

Seek freedom and become captive of your desires. Seek discipline and find your liberty.“No books at all, Rabbi. Oh, they have a Coda but it’s just a collection of reminders, sometimes useful, sometimes to be discarded. They always adjust their Coda to current requirements.”
‍

Making workable choices occurs in a crucible of informative mistakes. Thus Intelligence accepts fallibility. And when absolute (infallible) choices are not known, Intelligence takes chances with limited data in an arena where mistakes are not only possible but also necessary.

It was an ancient Bene Gesserit insight. You looked for the ones who could say “Yes.” Never bother with underlings who can only say “No.” You sought the one who could make an agreement, sign a contract, pay off on a promise.

Now was the time for the historical art of politics she had learned from Odrade. “In all things you must appear important. No minor decisions pass through your hands unless they are quiet acts called ‘favors’ done for people whose loyalty can be earned.”